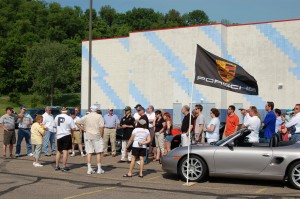 More than 20 cars gathered in the South Fayette Park and Ride lot. E. Paul Dickinson was first to arrive – very early – right after 9:00 AM. He had a challenge – no navigator. Next, Frank arrived in his brand new (well, for him anyway) jet black 356 fresh in from Oregon. By 9:45 we had a real gathering. The morning was just beautiful. The rally planners had ordered teriffic weather.

The Rabeneck vehicle had 2 navigators – Abbi & Rachel. For the 2nd year in a row they were able to “find a driver in need.” This year, Rachel rode with E. Paul and Abbi stayed with Dale. (Note: Last year – Rachel stayed with Dale and Abbi was Scott Mores’ navigator.

Iron Jack Purvis and Frank Bunecicky started the rally meeting promptly at 9:55 with the first car set to leave the parking lot at 10:00 AM sharp. Each car was given the “set of instructions” that was to guide them along the route. There were about an equal number of instructions and questions to answer.

Cars were released approximately 1 minute apart with Rachel and E. Paul out first. The rally route took the participants through Allegheny & Washington counties as well as into West Virginia. There were a number of tricky parts – both from an instruction as well as question point of view.

After approximately 2 1/2 hours of driving scenic highways and by-ways we ended up at A R’s Restaurant. Everyone made it back – though for some it took a bit longer than planned. E. Paul and Rachel left first and were almost the last to arrive at the restaurant. They went “a bit” out of their way. The official route distance was approximately 75 miles – they drove almost 95 miles.

Awards for the “best of the best” were handed out based upon points for correct questions & closest mileage for a “perfect run.”- 1st, 2nd and 3rd awards were distributed.

Thanks so much to Iron Jack & Frank Bunecicky and their wives in making this such a great event.

Take a look through the pictures to see who attended and the fun we had!