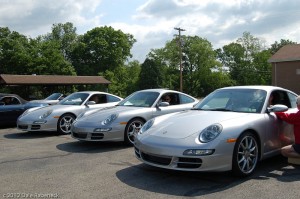 The weather was crisp. The temperature had not yet reached 60 degrees at 9:30 in the morning when we started to congregate at the the Masonic Hall in Kittanning, PA. In all, we had 13 cars come play (including 2 non-Porsche’s). Our “farthest driven was one of Dave Hergenroeder’s friends that came up from NC. Second farthest was one of the father & son teams, this one in a Silver 997 from Erie.

The Route was developed by Dave Hergenroeder. Fast Frank & Iron Jack worked the scavenger hunt part of the rally. Combining the route directions and items to find the team working the event created a challenging but fun morning.

There were a few interesting twists that came about from this year’s participants – “T” was early (yes, it is true) and The Strohmeier’s were 45 minutes late (well, maybe not really 45 minutes late – but 45 minutes later than they planned to arrive…) Brian and Kristen didn’t have much time to socialize before being sent right back out. Look through the pictures and you will see the trio of Silver 997’s (I was able to get a picture of the 3 lined up.) 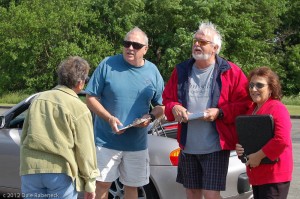 The first car was off at 10:00 AM sharp. We followed a long winding path up PA66 into South Bethlehem, West on PA861 through Rimersburg, and then North West on PA58 to Foxburg Pa. After 53 miles of driving and 50 some odd directions we made it to the Allegheny Grille.

Prizes were awarded to:

Take a look at all the pictures that we captured for the event.

You too can have a great time. Come out and run with us on October 6th. Look in the Rundschau an the website for more information closer to the event.