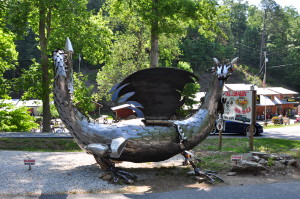 Tail of the Dragon

Four years ago, we linked up with the Can-Am caravan and headed to the Blue Ridge Boxster Summit (www.brbs.org) for the very first time.  The adventure was so great we have made this an annual Porsche event.  This year we broke tradition and left PA a day early with hopes to experience the early event.  This early event was so anticipated Michael even bought a GoPro to capture the experience.

After a nights rest, we woke early in the morning and joined others for a fantastic drive to Deals Gap, TN.  Roads on the way there were fabulous with a great pace kept by other Porsche drivers.  Not far from the destination we made a quick stop for gas and other necessities.  During this stop the girls began to chat about how being a co-pilot is not a fun experience.  Finally someone understood my pain and could empathize with me and my fear of going fast around turns. I heard how one girl takes along the emergency bags from airplanes because she doesn’t always handle the turns so well.  Another female suggested locking the doors, just in case the door would happen to fly open when you are staring down a large cliff while the drive is secure on a solid road (I have to admit this is one piece of advice I used this day and will continue to use). The men were done hearing us whine so back on the road we went.

Thirty minutes later we arrived at the US 129, aka the Tail of the Dragon (www.tailofthedragon.com).  Does not sound like much, but 318 turns in 11 miles is quite an adventure.  We mounted the Go Pro and off we went.  The ride up was fast and furious at first but then we got stuck behind one of many motorcycles you encounter along the road.  We had a few sections in which we got to push the speed limit and enjoy the ride.  We were lucky that day to avoid any speed traps along the way too.  Once we reached the end, a quick turn around and back another 11 miles and 318 turns.  I have to admit this is the first time I was ever nauseous in car.  Again a quick take off to only be slowed down by the two wheeled bandits.

On the way back, we lost life to the GoPro and pulled over behind a fellow BRBSer.  It was a great ride back and finally the dragon was conquered.  At the end Michael asked if I wanted to get something to eat.  As a true ARPCA member and BRBSer, I responded, “No. How about a beer?”  With agreement we drove into Bryson City, NC and spent the afternoon enjoying our rewards at Nantahala Brewing (www.nantahalabrewing.com/).  I was happy the day was done but also very happy we took the extra day.

You can check out our adventure here http://y2u.be/f786pDCmSmc  Next to come … Back of the Dragon (www.backofthedragon.com).