Stops at Historic Hotel and Museum

On May 24, the Porsche Touring Crew is returning to one of its most popular pit stops: the historic  Saxonburg Hotel, where almost 100 years ago President Woodrow Wilson registered as an overnight guest. The Hotel (www.hotelsaxonburg.com) opened its doors in 1832, but its period-furnished dining rooms have become a destination dining-focused location since owner Judy Feree took over in 2010.

The Hotel is a rural drive located a few miles off Route 8, north of Pittsburgh. Participants will gather at the Hotel between 11:00 and 11:30 and sit down for lunch just before 12:00 Noon.

The Hotel offers a wide variety of comfort food, including steamed mussels, lobster bisque, Reubens and fresh crab cakes, but also offers a selection of health-conscious fare. The (huge) Pittsburgh-style salad and tiramisu dessert are an unlikely, but tempting and very popular combination. PTCr’s will order from the complete menu and will enjoy dedicated parking. 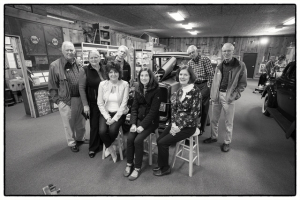 Several members of a Porsche Touring Crew group are shown enjoying a private guided tour of the Saxonburg Museum in Butler County after PTC’s last event at the Saxonburg Hotel in 2018. Museum Curator and Historian Fred Caesar is shown second from the left, back row.

As a child, President Wilson’s was dyslectic and didn’t read until he was 10 years old — but eventually became President of Princeton University. He repeated that position — but this time as President of the United States — from 1913 through 1921, and his legacy includes leading the U.S. through the first World War and preserving world peace in the years that followed. He also helped create the League of Nations (which evolved into the United Nations) and is credited with giving birth to the Federal Reserve System.

Focusing on more local history, after lunch at the Saxonburg Hotel, PTC Attendees can opt for a (free) private tour of the well-appointed Saxonburg Museum, located a short walk from the Hotel. The regional museum traces some of the early immigrants who forged the area’s economy. Saxonburg, thanks in part to its founder, inventor John Roebling, gained national prominence in the early development of various types of wire cable — a building block in U.S. transportation and infrastructure growth. An original 1937 Plymouth Coupe and 1926 Studebaker Erskine that once belonged to Roebling, will both be on display.

The Hotel is a rural drive located a few miles off Route 8, north of Pittsburgh. Participants will gather at the Hotel between 11:00 and 11:30 and sit down for lunch just before 12:00 Noon. All local and Saxonburg Hotel health requirements will be strictly followed.

The Touring Crew is an informal group that hosts luncheon events, and is always looking to welcome ARPCA members and their guests.  Reservations are required by entering Motorsportreg.com, clicking on the event, and registering. Contact Tom Mueller (ermtcm@verizon.net), or Wayne Desbrow (wdesbrow@zoominternet.net) for more information.

Image of Saxonburg Hotel by John A Roebling, (CC BY-NC-SA 2.0)