The Porsche Touring Crew has decided to cap-off a successful 2021 in style, with a Holiday get-together at the rustic Log Cabin Inn on Route 19, just a few miles North of Zelienople, PA***.  Among other things, the Crew will cautiously celebrate leaving the pandemic in its wake and hosting a full year of well-attended luncheon events.

The Wednesday, December 8th event, open to all ARPCA members and their guests, will feature good fellowship and stimulating conversation among old and new friends.

The Log Cabin Inn will provide a special backdrop for those discussions. The Inn began life in 1835 as a privately-owned home along an old stage coach route — but soon became known as the Stage Coach Inn when its owners started taking in travelers. The cabin survived being physically moved twice before settling in its current location, where it was enlarged and modernized several times. The business thrived and was renamed the Log Cabin Inn about the time prohibition was repealed.

The Inn’s kitchen offers a wide variety of American cuisine that includes aged Black Angus beef, fresh seafood, sandwiches, and soups and salads, finished off by a tray of homemade desserts made fresh daily. According to the Inn’s chef, selecting one of the Cabin’s famous prime rib dishes – and later splitting a gaping piece of peanut butter pie — is an oft-witnessed Holiday transgression.

Participants will arrive the Inn Wednesday, December 8, between 11:00 and 11:30 am, and (depending on weather) will be seated just before Noon. All ARPCA members and guests are invited, but must register by navigating to the Motorsportreg.com website.

The Porsche Touring Crew is an informal group within ARPCA that hosts social events, and is currently looking for suggestions for 2022 driving and dining venues. For more information contact Tom Mueller (ermtcm@verizon.net), or Wayne Desbrow (wdesbrow@zoominternet.net). 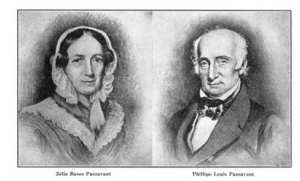 ***In the unlikely event you have ever wondered about the origin of Zelienople’s name:  It was German immigrant Baron Dettmar Friederich Basse who founded the borough in 1802.  Basse, who purchased 10,000 picturesque acres of Revolutionary War Depreciations Land, laid out the town and named it after his daughter, Zelie, who arrived in Zelienople from Germany in 1807 with her new husband, Philippe Louis Passavant. Basse later returned to Germany, leaving Passavant to play a major role in developing the borough.

Note:  ARPCA events always start with keeping its members and attendees safe, and as such, all COVID-19 and variant precautions required by the CDC, local municipalities and the Log Cabin Inn will be strictly observed at his event.