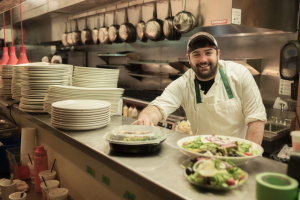 ARPCA’s Porsche Touring Crew – for the most part, a gaggle of good-humored malcontents and aging contrarians — always seems to be doing things “their own way.” And PTC is adding to that reputation with a mid-Summer quest for the best Italian eatery in the area.

The Crew has announced plans to re-convene August 23rd for an excursion to Angelo’s (www.angelosrestaurant.com), a third-generation Washington County eatery with a widespread reputation for excellence and innovative, as well as quality.  It all started back in 1939 with Angelo and Giacomina Passalacqua opened a small neighbor tavern in Washington.  They soon started serving real Italian spaghetti and fresh bread to local workers and travelers, and christened their shop (what else?) The West Chestnut Spaghetti Inn!

(EVENT UPDATE) Many people may not know Washington, PA has an active organization dedicated to music education and jazz appreciation, Washington Jazz Society. Bob Stark, an officer of the Society, will speak briefly about Pittsburgh’s Jazz scene and how he became interested in music – primarily listening to his brother Dave Brubeck’s LPs as a kid.  Bob currently plays in local theater company orchestras – and in his own band.  Join us to hear all about Bob and Pittsburgh’s Jazz scene.